Ester Crocetta, a visual arts artist, was born in Loreto Aprutino and graduated from the Liceo Artistico di Penne (Art School in Penne), in the Italian province of Pescara, Italy. She produced her first ensemble in 1996 in Pescara. At her first international exhibition in Berlin, Germany, in 2009, she exhibited some of her works, followed by a personal exhibition in Beijing, China, in February 2010, at the World Art Museum – one of the most important museums in China’s capital city. Subsequently, in 2013, she presented a personal exhibition in Venice, Italy, in association with the Biennale, followed by a fair in Contemporary Art held in the Casa Battlò, Barcelona, 2014, which hosted participants from all over the world. In subsequent years she has been engaged in some projects as an art valuer by the Ministero della Giustizia (Ministry of Justice), Pescara. She works with writers and publishers regarding editorial matters and book covers.

Currently, she is the Art Designer for various wineries in Abruzzo that are involved in art-related projects linked to the wine sector, such as the eno-cultural event in which she was involved in 2018 at the Italo-American Museum in San Francisco, USA. Again, in 2019, she was commissioned to sculpt various pieces for the sporting National Award “Giuseppe Prisco” concerning loyalty, fairness, and sportsmanship. Furthermore, she has been selected by the ARTE Mondadori Prize, among the 40 finalist winners who will exhibit at Palazzo Reale in Milan in October 2022, while in April, she has just concluded an artistic residency with a dedicated exhibition in the heart of Florence. 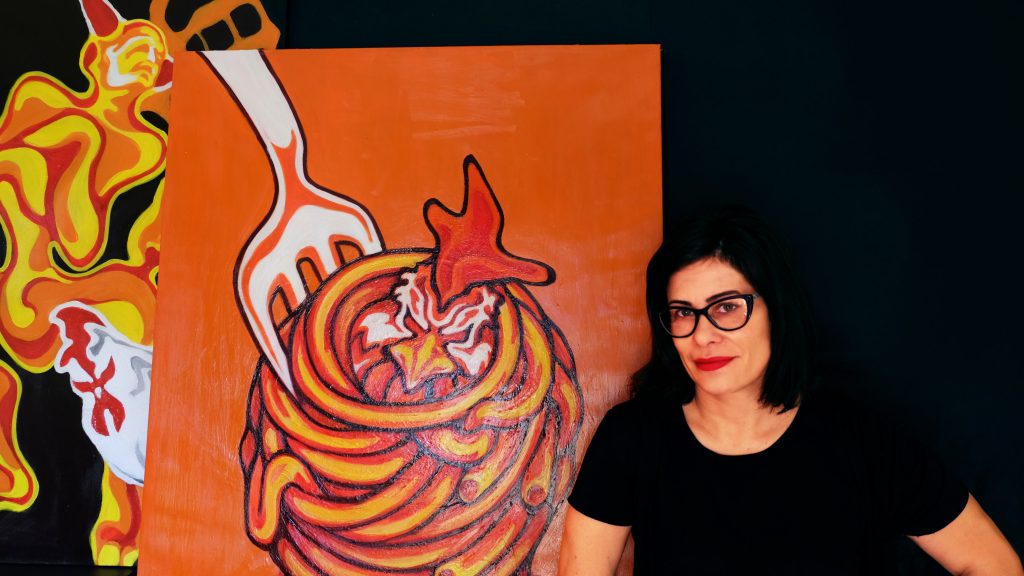 The CHICCHIRIA Poultry project is a summary of years of deep interior reflection and the history of the sequence of pictorial works and installations. The background is Abruzzese nature as experienced by the artist. “Poultry” is a transmutation that occurs between animal and man and expresses “the feeling of being alive” in all kinds of conditions, even modest ones, like those of animals in a chicken coop. CHANGE OF IDENTITY, imagining oneself as a chicken or a cock is an ironic and powerful comparison. Instinct becomes a tragedy – a sensation of confinement, a limitation balanced between the physical possession of wings and the inability to flight. The concept of the CHICCHIRIA Poultry is the theme of “ANIMAL FOOD”. Our liberated, consumerist society is still struggling to evolve towards this new theme. History has caused us to reflect on the balance and harmony within nature, teaching new limits regarding the excessive consumption of meat from animals and respect for the path of life; beyond vegetarianism and veganism.

First of all, introduce yourself to our public. Who are you, and how would you describe yourself as a person and an artist?

I live in the green Italian region of Abruzzo, which is separated from the capital city of Rome by a mountain chain. This area is special to me. I am aware of how much this aspect has conditioned my research into nature, and the environmental symbiosis also found in art.
Acknowledgment of the role played by this decentralized zone in which I live is important. It consists of a traditional culture and a social identity which demands little, combined with a geographical and morphological conformation. These factors have conditioned centuries of local history and inconstant relations between the city and the countryside. These factors have influenced the traits in my character and the way I interact with art. It is neither pride nor reproach. It is simply a statement of belonging and anthropological formation.

What is your artistic background? And when did you first realize you wanted to be an artist?

I have always loved being in contact with nature and animals. This attraction is in my soul.

From this decentralised zone which is not immune to the problem, I feel that a universal discourse is currently opening up which speaks of ECOLOGICAL TRANSITION and which renders me part of a worldwide reflection.

It is an incredibly huge multi-faceted topic which nevertheless makes us ever more aware, unfortunately, of having to review our real needs and to change our alimentary and social habits regarding our own lives and all forms of life which make up our ecosystem.

What are the main themes behind your work? And what does your art aim to say to the viewers?

As a child, I drew a lot. It was my favourite pastime. My creative inclination had already begun to show. As a result, I decided to study art which led me to my first work experience, initially, in technical drawing.

My first artistic confrontation came about when I was about 24 years old, when, participating in a small collective exhibition in Pescara, I was amongst the winners. My prize was a set of acrylic paints. It was the most important demonstration of appreciation in my career.

Over the years I have juggled work, family and art, attempting to dedicate increasingly more time to my artistic vocation in order to make it a point of professional reference.

In 2010 my most important artistic experience and business venture began with my first personal international exhibition in Beijing at the Word Art Museum.

In 2016 I participated in an art fair held at Battlò house in Barcelona and in 2018 I was invited to a wine culture event at the Italo-American Museum in San Francisco.

In April this year, during the recovery period from COVID, I did an art residence in Florence followed by an exhibition focussed on my latest project, Chicchiria Poultry, which is specifically a reflection on food derived from animals and the reasoning behind diet in a consumerist society.

How do you create your works? What is your creative process like?

I reflect a lot and take my time whilst creating an idea. Intuition is always lurking just around the corner. I find it after some time by reflecting on the works of art themselves. The foundation work then follows continuous change which develops like a plant as it grows, and which learns to grow in unison with its external environment.

I love the smell of oil paint and when I go into my studio, this fragrance conveys the bouquet of my desires to me. I love light, but I like to work in the half-light because I can perceive the darker and lighter shades better.

Your project CHICCHIRIA Poultry is an urgent reflection on our relationship with animals, and how we exploit them for our needs. How did you come up with this idea?

would be in the sector of alternative languages like that in the theatre (indeed masks are symbols of excellence where empathy is concerned), while “Poultry” is a summary dedicated exclusively to visual art which covers works such as painting, sculpture and installation.

This project, which reflects on the concept of food derived from animals, particularly refers to poultry.

The idea arose specifically from a chicken coop.

One day one of my neighbours, who lives in the country, invited me to follow him. He wanted to show me some special animals. I followed him and we went into his chicken coop.

I agreed with him regarding that particular beauty: I was struck by all the noise, the crazy colours, all those white feathers and red crests in motion. However, I realised how far our point of view differed as he made his final comment.

“See how chunky they are? Good enough to eat just as they are!”

My inability to see them as food caused me to reflect and think more around the subject.

Art can be a vehicle for deep reflection on concepts such as ENVIRONMENTAL SYMBIOSIS, respect for nature and man’s attitude towards animals.

The project analyses in particular the chicken consumption and market. Why did you decide to focus on chickens specifically?

Unfortunately, ours is a farmed planet.

A report written last year by the WWF says that 70% of bird-derived biomass and poultry-derived compost is used in human-oriented food products. Only 30% consists of wild birds.

60% of infectious diseases and approximately 75% of those emerging, originate from animals. 50% of the antibiotics used globally is used in animal farming and the veterinary sector. All of this represents a risk factor regarding the selection and spreading of resistant bacteria.

One third of infections in Europe is caused by bacteria which are resistant to antibiotics. In relation to the rest of Europe, sadly Italy holds first place in mortality due to resistance to antibiotics.

All these figures are worrying even without going into the details.

Furthermore, from an emotional point of view, changing identity, imagining oneself as a hen or a cock, becomes a powerful and ironic confrontation in the human brain.

A sensation of confinement. A limitation balanced between physical possession of wings and the incapacity of flight. The symbol of the project par excellence is the egg.

The egg is the synthesis of complexity – both for its shape and for its reproductive function, without excluding its fragility. A chicken coop can be the synthesis of a deeper thought: the cosmic egg, the mythological symbol par excellence at the origin of many cultures and civilisations.

How has this project changed your approach to food? And what did you learn from it?

History invites one to reflect on the reasoning behind food, hunting and the superiority of race. These are hot and current topics in a consumerist society. They are the key points of co-existence which go beyond veganism and vegetarianism.

Eating is a daily action, sometimes taken for granted, but in reality it is not. Food, through sensations which are not only gustatory, is a path of social analyses which respond to behaviours and reflections even for art.

The past couple of years have drastically changed the art world. What do you think of these recent changes? And how did these impact your work?

For sure, plans made before the Pandemic have gone by the wayside, and we have understood the necessity for technological support to face bad times too. Art has suffered a nasty blow, but it always reinvents itself and rises from the ashes because it is the preceptor of rebirth.

“Yes” to online exhibitions and all mediatic support so that the alternative communication it offers may always be accessible. Opportunities increase when supported by the Media.

I am interested in the new 3D technologies in the artistic sector and, in particular, in 3D printing. The idea of reproducing an art piece both by traditional means and with contemporary products, or with the help of a computer, fascinates me.

In my studio I have a small 3D scanner and a 3D printer, but until now my time has been taken up by other commitments. I intend to resume my research on this area. In recent years, 3D scanning and modelling technologies have become a powerful means of presenting and analysing works of art in virtual places, like on the web, and in real places, like museums or cities.

And lastly, what are you working on right now? Anything exciting you would like to tell our readers?

The next stage for this year is dedicated to the ARTE di MONDADORI EDITORE PRIZE, for which I have been shortlisted amongst the 40 finalists who will exhibit in Milan at the Palazzo Reale next October.

The work in contest is the sculpture “SUPINUS”, in honour of the white ox of SAN ZOPITO, patron saint of my hometown, Loreto Aprutino. It is a folkloristic event currently being considered for candidature for UNESCO heritage which represents a part of my social identity. 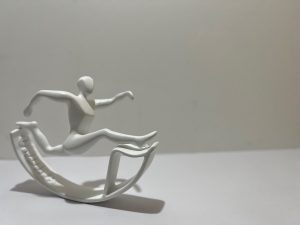 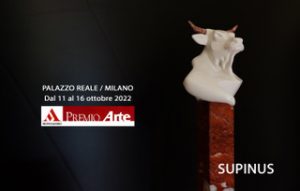